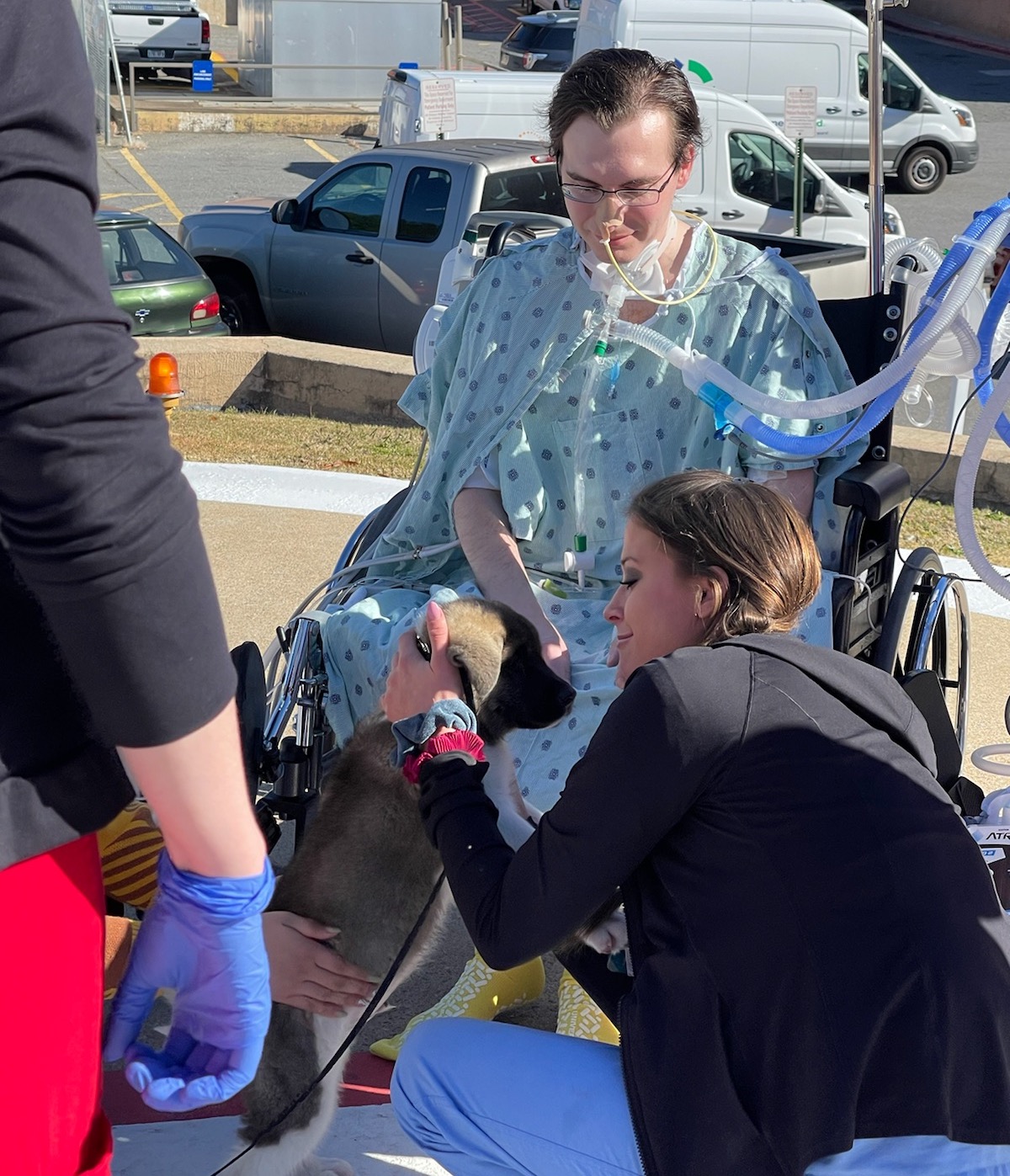 Scrolling through Facebook late at night, CHI St. Vincent nurse Jaquelyn Dumas was just looking to unwind after a long day while admiring photos and posts from friends and family. What she found was a desperate plea for help from Alabama nurse Melanie Behel.

Behel was frantically searching for treatment for her nephew, Luke Oliver. Battling a severe case of COVID-19, the 30-year-old former Marine was in dire need of Extracorporeal Membrane Oxygenation or ECMO, but there were no beds or machines available in Alabama to help him.

Dumas stumbled upon Behel’s plea for help in a Facebook Group for nurses and was immediately moved by the story. She was inspired to do anything and everything to help Oliver receive the life-saving treatment he needed.

“I took a screenshot of it,” Dumas said. “It was pretty late, so I sent it to Dr. Bauer in the morning first thing.” After reviewing his case and connecting with his family, CHI St. Vincent cardiovascular surgeon Dr. Thurston Bauer facilitated Oliver’s transfer to CHI St. Vincent Infirmary in Little Rock just days later.

“Luke was in rough shape,” said Dr. Bauer. “He needed ECMO, but there weren’t any ECMO beds available in Alabama.”

Similar to the heart-lung by-pass machine used in open-heart surgery, ECMO pumps and oxygenates a patient’s blood outside the body, allowing the heart and lungs to rest. When a patient is connected to an ECMO, blood flows through tubing to an artificial lung in the machine that adds oxygen and takes out carbon dioxide; then blood is warmed to body temperature and pumped back into the patient’s body.

With Oliver fighting for his life, Dr. Bauer first tried standard treatments for the severe case of COVID-19, but to no avail. At that point, there was no other option but to take Oliver to the operating room and immediately start ECMO treatment.

“It puts oxygen in the blood and removes carbon dioxide just like our lungs do,” Dumas said. “It gives us the opportunity to save people that we couldn’t ten years ago.”

While Oliver finally started the ECMO treatment that he desperately needed, the road to recovery had only just begun. Typically, patients spend a few days or maybe a week on ECMO treatment. Oliver, on the other hand, spent 33 days on the ECMO machine to help him overcome the damage done by the coronavirus.

“It has been an emotional roller coaster,” said Dr. Bauer. “His heart stopped on us several times. The coronavirus had destroyed parts of his lungs so much that air was leaking out of his lung.”

Even when his situation took a turn for the worse and all hope could have been lost, Oliver never gave up the fight. With Dr. Bauer, Dumas and his family by his side every step of the way at CHI St. Vincent Infirmary, Oliver’s grueling treatment process lasted nearly four months.

“This really was a life or death situation,” Dr. Bauer said. “I truly believe Luke would have died if we were not able to get him on ECMO as quickly as we did.”

Oliver’s positive attitude and infectious resiliency was felt by everyone he came into contact with while at CHI St. Vincent Infirmary. Having discovered the case in the first place and spending time getting to know Oliver and his family, Dumas was particularly moved, crying tears of joy when Oliver was deemed well enough to be discharged and return home to Alabama.

“I’ve worked every single day he was on ECMO and I was here, and I took care of him,” she said. “I’m so thankful that we were able to get Luke the treatment he needed and save his life.”

With the fight for his life behind him, Oliver and his family exited CHI St. Vincent Infirmary with a renewed sense of hope and an overwhelming feeling of gratitude.

“These are beautiful people,” Oliver said. “This whole hospital is full of angels. I’m not a wealthy man, but I wish I could give them everything in the world.”

A long time SEC football fanatic, Oliver returned home just in time to see his hometown Alabama Crimson Tide face the Georgia Bulldogs in the College Football Playoff National Championship. However, after spending more than 100 days battling COVID-19 in Little Rock, he had his sights set on a different goal.

“I’m looking forward to being back at home,” said Oliver. “I can’t wait to sit down in a nice, comfy chair and play with my dog.”