In 1888, Mother General Cleophas, leader of the religious community, with five Sisters of Charity of Nazareth, Kentucky, arrived at the Little Rock train station on the slow moving Iron Mountain Railroad. Sisters Mary James, Cornelia, Mechtildes, Mary Sebastian, and Hortense were invited to Little Rock by the Most Rev. Edward Fitzgerald, Bishop of the Little Rock Diocese.

A 10-bed Charity Hospital was founded on East Second Street by the Hagers' estate and with the support of Little Rock financier Edward Parker and others. It was the first hospital outside the boundaries of Kentucky which the Sisters of Charity would operate.

How it all began. CHI St. Vincent has embodied a spirit of charity, love of the poor, and a sincere desire to end suffering from its inception as "The Charity Hospital" in 1888 to the current era of managed care and rapid change in health care. CHI St. Vincent owes its existence to an epidemic that did not occur. In 1878 yellow fever was ravaging the South and was as near a Memphis. It seemed only a matter of weeks, maybe days, before the fever would strike Little Rock, which had few physicians and no hospital service at that time. Many, including Mr. and Mrs. Alexander Hager, believed only an act of God would stop the plague. The Hagers, two of the city's wealthier residents, vowed to God that if Little Rock was spared they would, in gratitude, provide the funds to build a hospital. Miraculously, the yellow fever outbreak did not affect Little Rock and the Hagers kept their vow.

"The people of this City have taken a just pride… Contributions of ice, meat, furniture, groceries and clothing have been quite liberal in the past and will no doubt continue in the future. Owing to the general appreciation of the public, immediate steps are being taken to enlarge the capacity of the buildings." - Arkansas Gazette, March 1889. 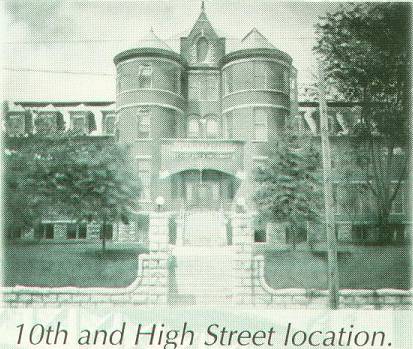 As the 20th Century began and America entered its age of technology, the hospital, now called CHI St. Vincent Infirmary, moved from its second location on Center Street to a three-story, 50-bed hospital at 10th and High Streets. In addition to being necessary to meet the growing demand for patient care, the move was a major step toward eliminating the stereotype of hospitals being only the last resort for the sick and dying.

The Sisters wrote, "After many tribulations, we took possession in September 1900. We moved all the furniture… and 36 railroad patients."

The expansion provided the space for the long-awaited St. Vincent Infirmary School of Nursing, which opened in 1906 as Arkansas' first nursing school. The first class, seven students, graduated in 1909. Until then, the Sisters served at St. Vincent as the only nurses. The school of nursing, which operated for 63 years until 1969, graduating 1,431 nurses was re-established in 2001 as the School of Practical Nursing (LPN).

Fifty beds were only sufficient until 1910 when a 100-bed annex was added to the Infirmary. 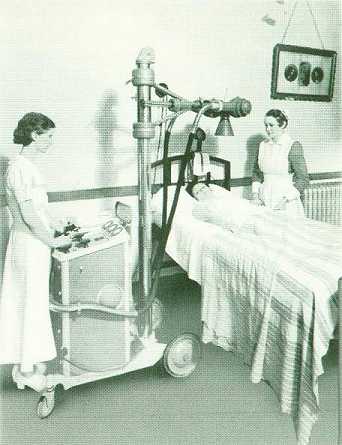 In March of 1920, St. Vincent became one of the first 12 hospitals in the United States to install X-ray apparatus and the Department of Roentgenology was formed. The fledgling department was the ancestor of the Radiology and Nuclear Medicine Departments of the late 1970s and paved the way for such current advances as Vertebroplasty, R2 Image Checker, and Positron Emission Tomography (PET) Fusion.

In 1920 the Medical Staff at St. Vincent - which had grown to 16 physicians - was officially organized in accordance with the American College of Surgeons. The medical staff would grow to about 140 active staff by 1954 and to approximately 865 active, senior active and associate staff members by 2002. Also, in 1920, St. Vincent became the first hospital in the state to be certified by the American College of Surgeons. Years later, this organization developed into the healthcare accreditation organization now known as The Joint Commission.

In 1938, the Sisters celebrated their Golden Jubilee (50th anniversary) in Little Rock by opening a maternity annex. Thousands of babies were born at the 10th and High Street location. The 60-bed maternity wing would also become the foundation for the state's first Intensive Care Nursery in 1972. St. Vincent would enter a 16 year hiatus before resuming obstetrics in 1992.

The Sisters weathered considerably adversity throughout their early years in Little Rock. In the early 1900s, they faced smallpox. "During the time we lived on Center Street, which was nearly two years, one of the doctors sent in a patient suffering with smallpox. He was with us three or four days before we knew what was the matter. He was sent to the pest house and we were quarantined nine or ten days." -First Days in Little Rock.

Disease returned in even greater measure in 1949 when St. Vincent was confronted with one of Arkansas' worst outbreaks of polio patients.

In March of 1952, tornadoes lashed the area and a stream of injured turned toward 10th and High Streets. The Arkansas Gazette reported that 87 wounded were admitted, stating, "Part of the maternity ward was turned into an operating room, and the hospital was crowded with hundreds of blood donors. Beds were even placed in the halls of the maternity building." 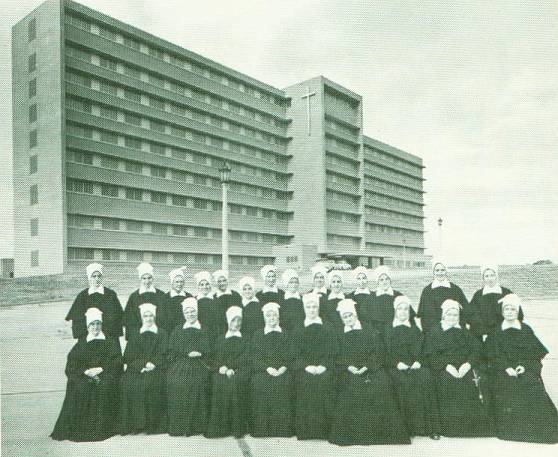 Once again the seeds of expansion were planted, or perhaps transplanted. The Little Rock Diocese, which had managed and owned the hospital since its early beginnings, set the course for the future of St. Vincent:

Second, the Diocese gave ownership of the hospital to the Sisters of Charity of Nazareth.

The former move was not universally viewed with favor. Monsignor John Scheper, who was an advocate of both decisions, recalled that Sister Mary Patrice, a first-floor supervisor, was not pleased with the new location.

Monsignor Scheper said deeding the hospital to the SCNs was a logical move for the Diocese, which was weary of the decision-making required for the operation of such a busy hospital. The Sisters, he says, were "very devoted to the care of the sick," and they were "in control" of the hospital. "They knew everything and they were always on hand when somebody needed something." - Arkansas Catholic, 1988. In December of 1954, St. Vincent made its fourth move to new quarters. The Sisters opened the current nine-story hospital at Hayes (now University) and Markham. The new building had 312 beds and plans were made for additional expansion.

Only the size, not the philosophy, had changed. Sister Michaella Duke, who was the administrator at the time, sent a letter to hospital employees emphasizing a code of conduct. "Be courteous at all times, greeting everyone with a smile; Be prompt… never give way to impatience and annoyance; Manifest a spirit of real interest and cooperation in your work; Bear in mind the reputation of CHI St. Vincent Infirmary depends upon your efficient service." She punctuated the letter with "Our basic philosophy - the patient comes first!"

CHI St. Vincent has been providing healthcare to Arkansans since May 18, 1888, when the Sisters of Charity of Nazareth founded what is now CHI St. Vincent. Beginning as The Charity Hospital, it was located on east Second Street near what is now the Clinton Presidential Library. Today, CHI St. Vincent has four hospitals  and a network of nearly 50 primary and specialty care locations with 145 family practice and specialty physicians and more than 2,000 employees who are continuing the healing ministry of Jesus Christ and the legacy of excellence in healthcare.

In January 2013 CHI St. Vincent Infirmary became the first and only hospital in Arkansas to earn The American Nurses Credentialing Center (ANCC) Magnet® Recognition designation for excellence in nursing leadership, clinical practice, innovations and positive outcomes. There is no higher honor in nursing and quality patient care than to meet the nation’s highest standards set forth by the ANCC in the Magnet® Recognition Program.

Excellence at CHI St. Vincent extends to the physicians who provide world class, industry-recognized care. Ali Krisht, M.D., director of the Arkansas Neuroscience Institute (ANI) at CHI St. Vincent, is among the top one percent of neurosurgeons in the nation according to 2013 physician ratings firm Castle Connolly. Also, U.S. News & World Report names Krisht as one of the country’s leading neurosurgeons. Patients seeking neurosurgical care come to ANI from across the state, the country and even the world.

The Jack Stephens Heart Institute atCHI St. Vincent Infirmary has technology and expertise like no other in Arkansas for the treatment of cardiovascular disease. The centerpiece of a $36 million dollar investment in 2012 in the heart health of Arkansans is a hybrid surgical suite and cardiac catheterization lab – the first and only such cardiac hybrid suite in the state and one of just a few among the most prestigious heart centers in the country. This hybrid suite combines imaging and surgery to allow cardiovascular surgeons, cardiologists and radiologists to treat the patient simultaneously and perform procedures in Arkansas that, until the acquisition of this technology by CHI St. Vincent, required travel out of state.

In 2008 CHI St. Vincent invested in the critical care needs of the people of Arkansas with another multi-million dollar expansion and renovation. The $47 million project includes a new emergency department and the expansion of critical care at St. Vincent Infirmary to care for patients with cardiovascular, surgical and medical intensive care needs. The CHI St. Vincent Outpatient Surgery Center for Gynecology, Orthopaedics and Urology, another phase of this project, increased the number of new outpatient surgery suites from five to 11 and square footage from 10,000 to 21,655 square feet. The outpatient surgery suite is home to the da Vinci Surgical System for urological, gynecological and prostate treatment.

Additionally, patients of the CHI St. Vincent Spine Institute, who have serious spine conditions, also find high quality care and the latest in surgical technology for their spine illnesses and injuries. In 2004 the CHI St. Vincent Spine Institute was the first in Arkansas to perform artificial spine disc replacement surgery and was chosen as the regional training site for spinal surgical implants. The Spine Institute also earned the Blue Cross Blue Shield Blue Distinction Centers award for Spine Surgery®.

In 2009 The CHI St. Vincent Orthopaedic and Spine Institutes were the first in the state to develop educational programs for orthopaedic patients. The CHI St. Vincent Joint and Spine Academies educate patients about joint replacement and spine surgery in a classroom setting, before surgery, to equip patients physically and emotionally for recovery. Clinical educators teach with the assistance of coaches selected by the patients to assist in recovery and rehabilitation. The goal and the results are improved patient outcomes and fewer complications.

Today, as CHI St. Vincent celebrates 130 years of caring for the citizens of Arkansas, we are mindful that we are continuing a heritage that began more than 2,000 years ago – the healing ministry of Jesus Christ. We will continue that ministry by providing high quality, accessible and affordable healthcare for today and for generations to come.