But it started from a much more humble beginning. During the Civil War, Hot Springs was nearly deserted and those who were there had to deal with intimidation from advancing and retreating troops. After the war ended, several families who had lived in Hot Springs returned and reopened the stores and hotels. The groundwork was laid when the Rev. Patrick McGowan, a devoted friend of the Sisters of Mercy who settled in Hot Springs after retiring from active service, donated land to build a school in Hot Springs in 1880. In 1888, Father McGowan asked Hot Springs physician Dr. J.M Keller to buy a building and surrounding property that was suitable for the location of a hospital.

The perfect building was already there. It was being used as the Adams Hotel on Cedar Terrace and had originally been built to use as a potential hospital. Father McGowan donated the building and property, valued at $10,000, to the Sisters of Mercy. The Guardian, the state’s most prominent Catholic publication at the time, published it was “on a prominent elevation, large and commodious, attractive in architecture at once catches the eye, and holds the attention of the stranger.”

Shortly thereafter, Mother Mary Aloysius Fitzpatrick and Sister Mary Clare Quinlan of St. Mary’s Convent in Little Rock were sent to Hot Springs with orders to administer and operate a hospital. They were given $1 for operating expenses, as well as instructions to turn the frame house into a 30-bed hospital and name it St. Joseph’s Infirmary.

The hospital was opened to Hot Springs residents on September 24, 1888, and the first patient, an engineer, was admitted by local physician Dr. Charles Drake. Mother Aloysius and Sister Clare were kept so busy during their first six months that Sisters Lucina Primm and Rose Blackmore were sent from Little Rock to help in the new hospital. Toward the end of the hospital’s first year of existence, another Sister was sent and the five continued the work of providing health care for the residents of Hot Springs.

A year later, the Sisters’ great benefactor in Hot Springs, Father McGowan, was admitted to St. Joseph’s Infirmary as a patient. He was cared for by the Sisters there – and prayed for by all of Arkansas’ Sisters of Mercy – until he died in November of 1889. The number of patients the Sisters at St. Joseph’s Infirmary were seeing continued to grow, and by the turn of the century it was evident that an expansion was needed. 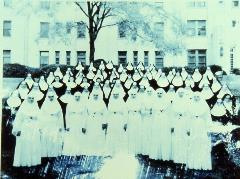 In 1903, a five-story annex made of brick and stone was constructed adjacent to the original building. The new hospital building sat parallel and slightly in front of the original structure facing Cedar Street, and the two were connected at their rear left and right front corners by a five-story porch.

St. Joseph’s Infirmary was becoming extremely well known throughout the South and Midwest. It was modern in every detail and equipped to give the mineral baths for which Hot Springs was so widely known.

The April 11, 1903, edition of the Watertown (N.Y.) Herald wrote: “St. Joseph’s Infirmary is a combination of a first-class hotel and hospital; a place for the person seeking rest, recreation or health. The service is that which one is accustomed at a first class hotel. And yet there is on the top floor a modern operating room, which must be a delight to physicians, a pharmacy, as the accessories to a hospital. A hospital with all the detailed furnishings of a hotel is St. Joseph’s.”

The bath rooms were on the first floor with hot water from the celebrated springs conducted in protected pipes to preserve the natural heat and healing virtue.

The Sisters of Mercy were experienced and well-trained nurses, capable of giving patients that careful and skillful attention which promoted rapid and permanent recovery from sickness. All of the area’s prominent doctors treated patients at the Infirmary.

In 2014, Mercy Health and Catholic Health Initiatives (CHI) signed a definitive agreement to transfer ownership of Mercy Hot Springs hospital and medical group to CHI St. Vincent. The agreement recognized the extremely challenging health care environment in Arkansas and how working together would enhance the Catholic health ministry and strengthen access to health care are key objectives.

Name changes aside, the same foundational mission and values that steered CHI St. Vincent Hot Springs through its first 125 years, promise to serve the Hot Springs area well into the future as they keep the hospital on a steadfast course of providing patients with the very best in compassionate health care.