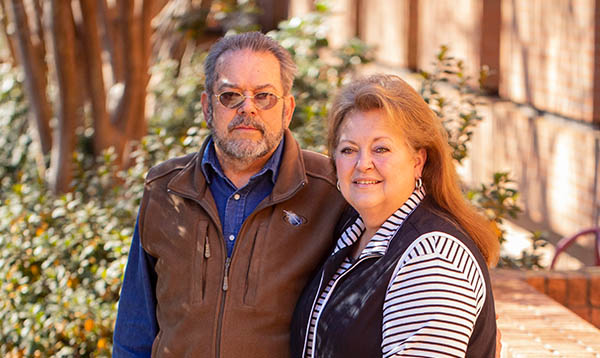 Troy Roberts, a 66-year-old from Bald Knob, Arkansas, and his wife, Debbie, received a phone call that changed their lives. They were sitting in a hotel room in Nashville, Tennessee—a five-hour drive from their home—and on the other line was a nurse from Vanderbilt University who informed Debbie that they had a heart that could be transplanted into Troy.

“She said ‘Can you be here in an hour and a half, because we have a new heart?’” says Debbie Roberts. “And I just started crying. I couldn’t believe it.”

Even though Troy Roberts lived a mostly healthy life—working, coaching youth baseball, performing chores like mowing the lawn—he experienced his first heart attack at age 38. While his lifestyle wasn’t the cause, he did have a long family history on his mother’s side of heart disease, including cousins who passed away as young as 33.

After having four heart attacks throughout his late 30s and 40s, Troy walked every day to stay in shape. However, his condition continually worsened and on January 17, 2018, he collapsed at work and was rushed to a local hospital. After a few weeks of testing and treatment, Troy was sent to CHI St. Vincent in Little Rock—the largest hospital in the Heart Institute’s network—in an ambulance to be treated by cardiologist Muhammad Waqas, MD.

Dr. Waqas recommended that Troy receive a left ventricular assist device, or LVAD, to get his heart pumping properly again and to help him survive until he could get a heart transplant.

“It’s such a wonder,” says Debbie. “If he wouldn’t have had that procedure, he would never have lived long enough to get a heart transplant.”

“The LVAD is for advanced heart failure patients,” says Dr. Waqas. “Patients who have gone through directed medical therapy for years and their heart function has deteriorated to the point where those therapies can’t maintain their normal heart function anymore.”

Dr. Waqas explains that in general only about 5–7 percent of heart failure patients are in an advanced enough stage to receive the LVAD. It is used as both a temporary measure to keep patients alive until they can receive a heart transplant or as destination therapy, which means it is a permanent fix for the patient’s heart.

CHI St. Vincent Heart Institute was recently recognized as a Center of Excellence for its LVAD Program by the Joint Commission, a distinction that reinforces the commitment Dr. Waqas and his partner, cardiovascular surgeon Thurston Bauer, MD, have to providing the best treatment for every patient.

“Dr. Bauer and I came out of fellowship at the same time and started this new LVAD Program from scratch,” says Dr. Waqas. “Defying the odds, the program was a huge success. We’re very proud of the team and, more importantly, extremely proud of our patients who give us a chance to be a part of their lives. That is how we function—at a family level.”

All in the Family

Robert Laster, a 75-year-old who lives just outside of Warren, Arkansas, with his wife, Laverne, felt the warmth that Dr. Waqas and Dr. Bauer bring to their care firsthand.

“Dr. Waqas—that guy is a super human being; he loves people and he does everything he can to help them,” says Laster. “And Dr. Bauer is my human Superman. I haven’t got words to express how good that man is. [Before the procedure,] he said ‘Look in my eyes and see if you see any doubt…you’re going to get up and you’re going to walk out of this hospital,’ when I didn’t even believe it myself.”

Dr. Bauer notes that Laster was a high-risk and complicated patient due to his previous surgeries.

“It was one of the most difficult LVAD implants I have ever done,” he says. “Every time I see him, I am overwhelmed with gratitude that he has recovered so well. He is a fighter, and we spent many long days and nights together in the OR and the ICU after his surgery. Whenever I see him I just can’t help giving him a big bear hug.”

Similar to Troy Roberts, Laster is an active man who suffered from a series of heart issues over about a ten-year period, including three separate operations. He visited his doctor just before Christmas in 2017 and exhibited telltale signs of advanced heart failure—extreme fatigue, severe shortness of breath and a complete loss of appetite—and was taken by ambulance to CHI St. Vincent in Little Rock, the same hospital where Roberts was treated.

The doctors at CHI St. Vincent stabilized his condition and allowed him to go back home for the Christmas holiday. However, they told him he would have to come back for more treatment in January.

“I remember sitting at my daughter’s table and saying that this was probably the last Christmas I’ll have, because I really didn’t think I was going to recover,” says Laster.

On January 8, 2018, Laster was back at CHI St. Vincent Heart Institute and ended up going through six operations in the span of a week, including the implantation of an LVAD. He spent the next three months in rehab and by the first week of May he was healthy enough to return home to his family.

“I am continually amazed by the courage and fortitude that our patients and their families demonstrate on a regular basis,” says Dr. Bauer.

“When we deliver a patient through their LVAD recovery and we see them return to the things in their life that matter most to them, it provides us with a sense of purpose and unparalleled joy and satisfaction. Dr. Waqas and I are ‘all-in’ for our patients.”

Recovering from open heart surgery is not easy, and nobody knows that more than Troy Roberts and Robert Laster. For both men, the most important part of getting a second chance at life was what it allows them to do.

“Part of my bucket list has always been seeing my granddaughter graduate from nursing school,” says Laster. “She’ll come down and change my dressing for me and lay out my medicine—which she doesn’t have to do—and we were talking and she teared up and said how much this graduation means to her now that she’s going to be able to look out there and see me when she receives her diploma.” Similarly, after Troy Roberts gets back to full strength after his heart transplant, he intends to spend more time with his grandchildren, in particular going hunting, and also in his community. Coaching youth baseball is a passion of his and he is looking forward to getting back out on the field.

“I’ve got one grandson that hasn’t yet killed a deer,” he says. “And I’d like to help my other two grandsons learn how to play baseball. Of course, I haven’t met a coach that’s as smart as me yet.”

To learn more about heart disease, or  to schedule an appointment with a  CHI St. Vincent doctor, visit  chistvincent.com/heart.