As seen in The Sentinel-Record by Rebekah Hedges 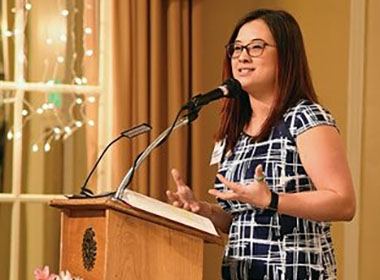 Arkansas has one of the highest suicide rates in the country, but Hot Springs saw a reduction in 2016, a suicide prevention specialist said Wednesday.

Reece's father died by suicide when she was only 10, she told Rotarians as she stressed the importance of having conversations and building relationships as ways to combat suicide.

"We've not spoken about (suicide) because it is attached to shame and so many devastating emotions, but this problem isn't going away," Reece said.

Arkansas ranks in the top 10 for states with the highest rate of suicide, Reece said, noting accurate tracking of the ranking is challenging due to the process of obtaining information on the topic.

"In 2016, we saw a 50 percent reduction in our suicide rate in Hot Springs due to our tireless efforts, but they don't end with us," she said.

During a question-and-answer session, Garland County Coroner Stuart Smedley said Garland County sees an average of 30-40 deaths from suicide per year, stating that the ages range from 17-80.

Reece described the issue as "unrelenting" and said her target audience is the retired community. She said the highest demographic prone to suicide is white men older than 50.

"Maybe you're retired and out of work, that can have an impact on your purpose in life. We want to make sure people feel connected in the community; that's where you start preventing this problem from happening," she said.

Reece has been furthering awareness for suicide prevention in the community for over four years and working for CHI St. Vincent Hot Springs for about 18 months.

CHI St. Vincent Hot Springs President Tony Houston said Reece has been "incredibly successful in raising awareness in the community. We are serving Garland County fairly well now and we're continuing to find other ways to help Arkansas at large."

Reece recently partnered with local law enforcement to create a suicide prevention PSA and is partnering with LakePointe Church to reach youths, as she believes it is pertinent with internet addictions and social media bullying.

"There are people on two sides. One side says it won't affect people to do something about it and the other is people that are terrified to do anything and trigger someone. Learning to walk that line and reporting safely is important," she said.

SafeTALK is a training course intended to educate youths on methods of becoming alert to the dangers of suicide. The safeTALK event will be held from noon to 4 p.m. at Lakepointe Church on Feb. 3 for ages 15-22.