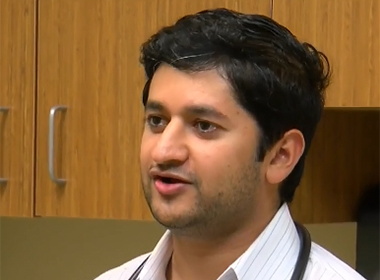 December 21, 2017 -- The Arkansas Department of Health said the spike in this year's flu season hit us early. The state department of health urges anyone who has the flu or feeling under the weather to stay home and away from their loved ones to help fight this early spike in cases this flu season.

Dr. Mark Viegas walked in to examine Shams Jeffer at CHI St. Vincent's West Little Rock clinic Thursday.  Jeffer said, "I never thought I would have the flu. I was just visiting town." Some may call it bad timing or bad luck. "I just have a runny nose. I feel like my head is pounding," Jeffer told us Thursday.

She is visiting Arkansas just as the state health department said this year's flu season is spiking early.  The chief medical officer at the state department of health Dr. Gary Wheeler showed us a graph that explains the sharp rise in the number of emergency room patients already diagnosed with the flu this flu season. Dr. Gary Wheeler said, "The peak starting right now at least a good 10 weeks or so earlier that we would have expected." "So if you've not had a flu vaccine it's time to go get one like right now," Dr. Wheeler said.

He said there is no way to tell the exact reason the spike occurred early but they do know it is happening. "Typically we see the flu plow into the state around January (or) February and we're seeing lots of cases already this year," he said. Another graph showed Arkansas is considered to have "widespread" flu activity. One of the nearly dozen states to have that title this December.

Jeffer's doctor in West Little Rock agrees. Dr. Viegas said,"We have been diagnosing the flu at least several a day." He agreed he has seen a spike in the flu recently.  A quick flu test and now this visitor can take a deep breath since she learned her flu test was negative.

She said the scare has her thinking twice about not getting her flu shot this year.  Dr. Wheeler said it looks like the flu shot is matching up pretty well to fighting the flu strains in the state so far.